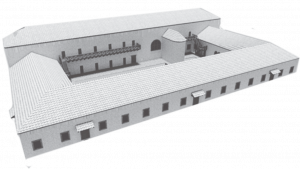 The thermal spas in Ilidža, in the Sarajevo plain, were planned during the emperor Marcus Aurelius (161-180), after a large number of military veterans got land in the area. The stay of veterans, but also of the wounded, determined the original purpose of these Roman thermal spas, which were also a public bathing site.

The thermal spas in Ilidža were the spa resort of municipal level, and they were located on the important communication of Via Argentaria – Narona, that is, the communication linking the Podunavlje and Upper Podrinje with the Adriatic coast. According to the incomplete record found on archaeological stone remains, the village was called “AquaeS…”, and it is assumed that it was named “Aquaurum Sulfur or Sulfuratae” (sulphur bath).