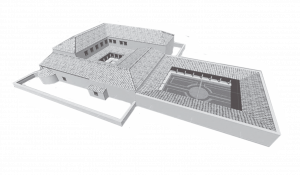 The best-known and most luxuriously appointed villa so far excavated in an urban area is the one at Ilidža near Sarajevo (cat. no. 22, T. 17 a and T. 17 b). This was of the type with a porticus and an internal peristyle, with the rooms opening off the peristyle (Type IV variant A). This type of peristyle building was best suited to the densely populated area of a town or city.909 Peristyle villas were also common in Pannonia.

910 The villa at Ilidža was a detached building with no adjacent buildings forming part of a complex, making it a compact villa (Type VII variant A), residential in nature (Type III variant A) and of medium size (Type VI variant B).
The villa was built in several phases,911 in which the addition of the eastern extension marks the point at which the villa with an atrium and modest porticus became a villa with a central internal peristyle and a porticus.