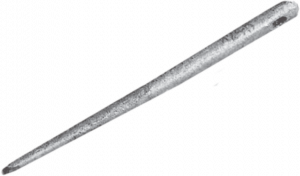 The first researches of Ilidža began during the Austro-Hungarian Monarchy in 1882 and 1883. The mosaic from the altar was discovered in that period, as well as the inscription that the citizens of the time set up for emperor Diocletian (Gaius Aurelius Valerius Dioclectianus 284-305).

This inscription is significant because it contained the name of the town “Aquae S…”, which was the administrative centre of the Sarajevo region. An “urban villa” facility was discovered, with a typical interior arrangement of a rich Roman house decorated with 12 mosaics, and central heating devices were found beneath the floors.

Several objects that were connected by colonnades of pillars and ramparts were also discovered. Bone needle. Simple sewing / knitting needle, with a hole on one end.